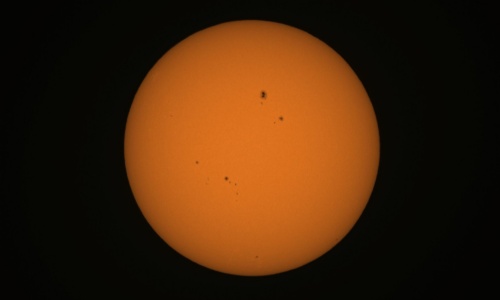 Crescent Nebula: NGC 6888, is about 25 light-years across blown by winds from its central, bright, massive star. Found in the nebula rich constellation Cygnus, NGC 6888 is about 5,000 light-years away.

Double Cluster of Perseus: This pretty starfield spans about three full moons (1.5 degrees) across the heroic northern constellation of Perseus. It holds the famous pair of open star clusters, h and Chi Persei. Both clusters are about 7,000 light-years away and contain stars much younger and hotter than the Sun. Separated by only a few hundred light-years, the clusters are both 13 million years young based on the ages of their individual stars, evidence that they were likely a product of the same star-forming region.

Orion Nebula: M42 blazes brightly in the constellation Orion. Popularly called the Orion Nebula, this stellar nursery has been known to many different cultures throughout human history. The nebula is only 1,500 light-years away, making it the closest large star-forming region to Earth.

The Sun: Appearing more orange than white due to the atmosphere scattering of blue light, you can see the sun spots move across the two images taken across the course of a week with a solar filter on the telescope.

Andromeda Galaxy: Also known as Messier 31 (M31), is a spiral galaxy located about 2.5 million light years away. It is thought that the Milky Way and Andromeda will collide several billion years from now. The black holes located in both galaxies will then reside in the large, elliptical galaxy that results from this merger.

Andromeda, Perseus, Cigar and Crescent were taken from Cley Hill. Orion was taken from central Bath and the Sun was from JoG.